Boomerang Capital will review value add opportunities in the Single Family Housing market. In the traditional equity and fixed income markets, it has become a challenging to generate income without taking significantly more risk. Boomerang Capital offers relative safety and consistency of income delivered by an experienced team of relationship based lenders. Single Family Homes are arguably the most important asset class in real estate and Boomerang Capital provides exposure through a private fund structure offering senior secured debt in the form of 1st lien positions on 500 loans across 12 states.

Founded in 2006, Boomerang Capital Partners, LLC is a priva... 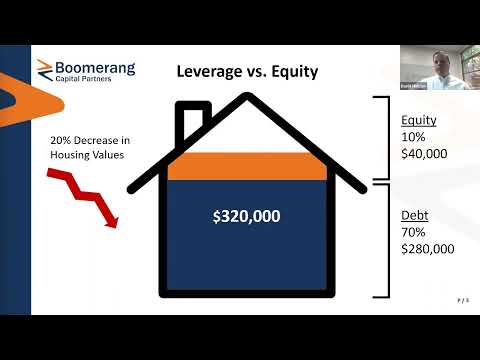 Boomerang Finance, LLC (the “Fund”) has an investment objective of providing income with limited variability in returns. This is accomplished by providing short-term, business-purpose loans secured by real estate in a first lien position with the additional protections of a personal guarantee from borrowers and cross collateralization. All loans are self-originated, and risk managed through careful underwriting, thoughtful portfolio construction and consistent servicing. The majority of borrowers are return clients. Exposure is broad-based, and the Fund is structured as a REIT.

Let’s grow our businesses together